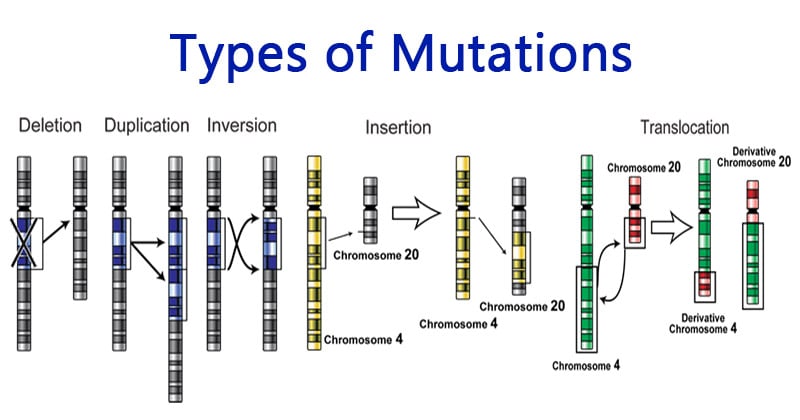 There are various schemes for classification of different kind of mutations. Depending on:

A. The Type of Cell Involved

B. Mode of Origin

The spontaneous mutations occur suddenly in the nature and their origin is unknown. They are also called “background mutation” and have been reported in many organisms such as, Oenothera, maize, bread molds, microorganisms (bacteria and viruses), Drosophila, mice, man, etc.

Besides naturally occurring spontaneous mutations, the mutations can be induced artificially in the living organisms by exposing them to abnormal environment such as radiation, certain physical conditions (i.e., temperature) and chemicals.

According to their mode of direction following types of mutations have been recognised:

In an organism when mutations create a change from wild type to abnormal phenotype, then that type of mutations are known as forward mutations. Most mutations are forward type.

2. Reverse or back mutations

The forward mutations are often corrected by error correcting mechanism, so that an abnormal phenotype changes into wild type phenotype.

According to size following two types of mutations have been recognized:

When heritable alterations occur in a very small segment of DNA molecule, i.e., a single nucleotide or nucleotide pair, then this type of mutations are called “point mutations”. The point mutations may occur due to following types of subnucleotide change in the DNA and RNA.

– Deletion mutations. The point mutation which is caused due to loss or deletion of some portion (single nucleotide pair) in a triplet codon of a cistron or gene is called deletion mutation.

– Insertion or addition mutation. The point mutations which occur due to addition of one or more extra nucleotides to a gene or cistron are called insertion mutations.

The mutations which arise from the insertion or deletion of individual nucleotides and cause the rest of the message downstream of the mutation to be read out of phase, are called frameshift mutations.

When changes involving more than one nucleotide pair, or entire gene, then such mutations are called gross mutations. The gross mutations occur due to rearrangements of genes within the genome. It may be:

(i) Translocation. Movement of a gene may take place to a non-homologous chromosome and this is known as translocation.

(ii) Inversion. The movement of a gene within the same chromosome is called inversion.

In the permissive condition, the phenotype is no longer mutant.

Example. Siamese cat – mutant allele causes albino phenotype at the restrictive temperature of most of the cat body but not at the permissive temperature in the extremities where the body temperatures is lower.

For example, the bacterium Escherichia coli does not require the amino acid tryptophan for growth because they can synthesize tryptophan. However, there are E. coli mutants that have mutations in the trp genes. These mutants are auxotrophic for tryptophan, and tryptophan must be added to the nutrient medium for growth.

According to their phenotypic effects following kinds of mutations may occur:

The mutations which have dominant phenotypic expression are called dominant mutations. For example, in man the mutation disease aniridia (absence of iris of eyes) occurs due to a dominant mutant gene.

Some mutations alter the phenotype of an organism so slightly that they can be detected only by special techniques. Mutant genes that give slightly modified phenotypes are called isoalleles. They produce identical phenotypes in homozygous or heterozygous combinations.

Loss of function mutation is also called inactivating mutations, result in the gene product having less or no function (being partially or wholly inactivated).

The gain of function mutations also called activating mutations, change the gene product such that its effect gets stronger (enhanced activation) or even is superseded by a different and abnormal function.

According to the types of chromosomes, the mutations may be of following two kinds:

I. Chromosomal Mutation and Types

a. Structural changes in chromosomes:

(a) Loss: Deletion which involves loss of a broken part of a chromosome.

(b) Addition: Duplication which involves addition of a part of chromosome.

(a) Rotation of a group of genes 1800 within one chromosome: Inversion in which broken segment reattached to original chromosome in reverse order.

(b) Exchange of parts between chromosomes of different pairs: Translocation in which the broken segment becomes attached to a non- homologous chromosome resulting in new linkage relations.

b. Changes in number of chromosomes:

Addition of one or more sets of chromosomes.

They may be further:

(a) Autopolyploidy. The autopolyploidy involves polyploidy, in which the same basic set of chromosomes are multiplied.

(b) Allopolyploidy. The polyploidy results due the doubling of chromosome number in a F1 hybrid which is derived from two distinctly different species. The resultant species is called an allopolyploid.

2 thoughts on “Types of Mutations”