Mucormycosis is an infection caused by several species of filamentous molds belonging to the order Mucorales.

There is a difference in virulence across different species belonging to the order Mucorales, which indicates an array of virulence factors, resulting in aggressive invasive disease in some species and infrequent mortality in others. The following are some of the virulence factors employed by the fungal species responsible for mucormycosis; 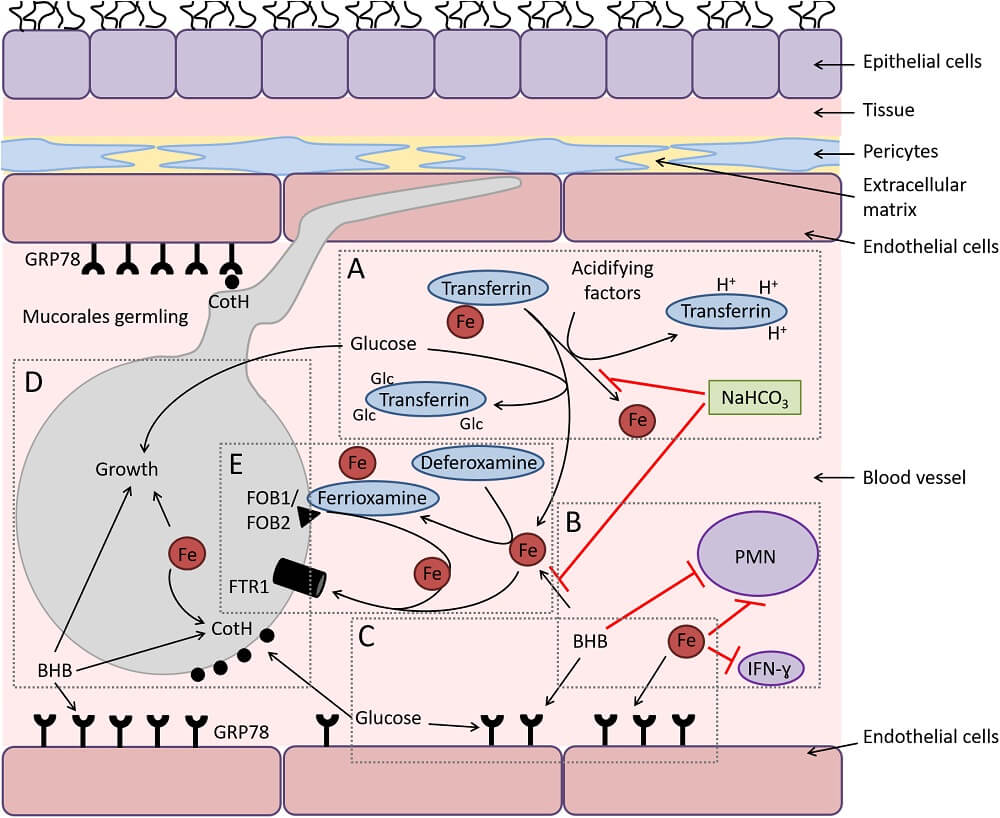 Figure: Diagram depicting the interactions of Mucorales with endothelial cells during hematogenous dissemination/organ seeding and the effect of host factors on these interactions and on the immune response. (A) Hyperglycemia and ketoacidosis result in liberation of iron from serum-sequestering proteins (e.g., transferrin) via glycosylation and protonation, respectively. (B) Ketone bodies (e.g., β-hydroxy butyrate [BHB]) and free iron negatively affect the immune response to the infection, while sodium bicarbonate (NaHCO3) reverses this negative effect by preventing iron release from transferrin and neutralizing acidity. (C) Surface expression of glucose-regulator protein 78 (GRP78) on endothelial cells is enhanced to cope with the stress elicited by hyperglycemia, free iron, and ketone bodies. (D) Glucose, free iron (transported by the high-affinity iron permease [Ftr1p]), and BHB also enhance the expression of fungal cell surface CotH, which results in the invasion of the endothelium and augmentation of fungal growth. (E) In deferoxamine-treated hosts, the iron-rich ferrioxamine binds to its fungal receptor (ferrioxamine binding proteins [Fob1/Fob2]) then releases iron via a reductive step prior to feeding invading Mucorales via Ftr1p transportation. Image Source: PLOS Pathogens.

Mode of Transmission of Mucormycosis 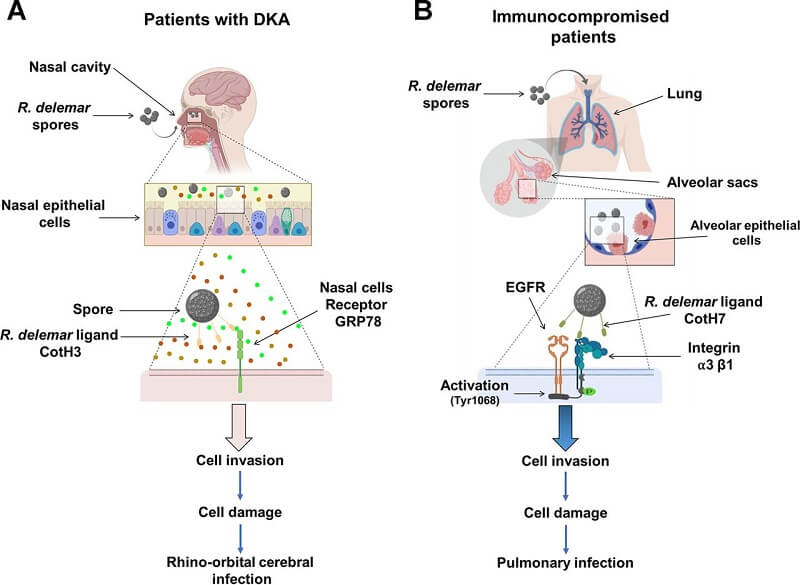 Figure: A diagram showing the molecular pathogenesis of the two main manifestations of mucormycosis. (A) R. delemar inhaled spores are trapped in the sinus cavities of patients with DKA due to the overexpression of GRP78 on nasal epithelial cells, and the interaction with fungal CotH3 results in rhinoorbital/cerebral mucormycosis. Colored circles represent elevated levels of glucose, iron, and ketone bodies. (B) In immunosuppressed patients, inhaled spores reach the alveoli and bind to integrin α3β1 via fungal CotH7, thereby triggering activation of EGFR and subsequent invasion and pulmonary infection. Image Source: mBio, American Society for Microbiology.

The clinical manifestations of the infections depend on the site of infection by the organisms as well as the mode of transmission of the organisms. The following are some of the types of mucormycosis that are observed in immunocompromised humans.

Prevention and Control of Mucormycosis