Despite several efforts, the situation of malnutrition in Nepal is alarming. Malnutrition is a serious problem in Nepal and is a major threat to the health of infants, adolescent girls, and pregnant and lactating mothers. According to NDHS (Nepal Demographic and Health Survey) in 2011, 41% of under-five-year-olds are stunted, 29% are underweight and 11% are wasted indicating early chronic malnutrition. According to a 2014 report of the Unicef, 37 out of 100 Nepali children below five years are found stunted (too short for age), 30 percent are underweight and 11 percent are wasted (very low weight for height). 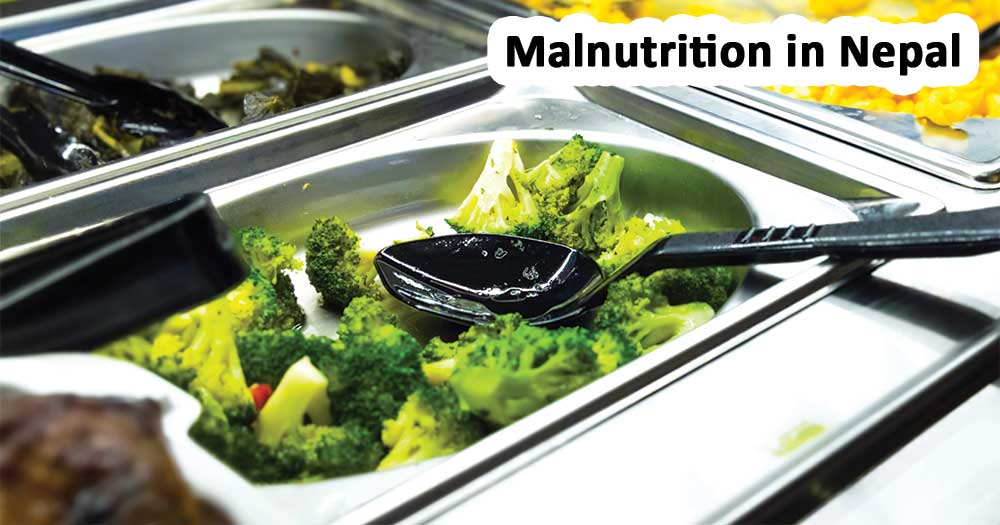 In addition, the rate of stunting (low height-for-age, also known as chronic malnutrition) in Nepal is among the world’s highest; UNICEF has reported that Nepal has the sixth-worst rate of stunting – 49 percent – among all countries that provided data. Malnutrition plays a role in 60% of child deaths, according to the UN children’s Fund (UNICEF).

As for malnutrition in women, 18 percent were undernourished and about 14 percent overnourished in the country, as per the 2011 Nepal Demographic and Health Survey (NDHS). This shows that overnutrition among women is also increasing in Nepal, as only nine percent of the women were overnourished according to the NDHS 2006. It is unfortunate that the rate of malnutrition is not decreasing as anticipated in Nepal.

In low-income countries like Nepal, the case of undernutrition remains high. In Nepal, the districts namely Humla, Bajhang, Baitadi, Surkhet, Doti, Achham, Okhaldhunga, Terhathum, Panchthar have a high percentage of child malnourishment rate, all above 56 percent, with Humla being the district with the highest number of children malnourished. Only 4 out of 10 children in Humla get proper nourishment which is alarming statistics.

Acute respiratory infections and diarrhea, Nepal’s leading causes of deaths among children under age five, are linked to acute malnutrition according to the Ministry of Health and Population. Diarrhea depletes children of critical nutrients and makes them more vulnerable to infection; infections, in turn, worsen their nutritional status.

A big cause of malnutrition is our poor health environment due to poor hygiene practices, poor sanitation, and poor living conditions. Poor access to safe drinking water and sanitation facilities are associated with skin and diarrhoeal diseases, as well as an acute respiratory infection.

Inappropriate infant and young child feeding practices are important contributors to malnutrition in the country where only 45 percent of mothers initiate breastfeeding within an hour of delivery and 70% exclusively breastfeed their children less than 6 months of age. Additionally, 29% of children 6-23 months consumed diets of a minimum dietary diversity and 24% consumed the minimum acceptable diet in the previous day.

For instance, food insecurity in remote areas is a serious contributing factor, where unavailability and lack of access to food, combined with poverty, have a dramatic impact on nutrition.

The way that the nutrition section has not been given prominence shows the government’s negligence over the past years.

Since 1993, the National Vitamin A Program has focused on improving the vitamin A status of children 6-59 months through biannual vitamin A supplementation with deworming (limited to children 12-59 months); this program has consistently achieved coverage of 80-90% of targeted children every six months. Universal salt iodization (USI) has reached 80% of households with adequately iodized salt for controlling iodine deficiency disorders and to improve iodine nutrition.

Iron and folic acid supplementation for pregnant and lactating women have also shown relatively high coverage although adherence needs improvement. Efforts recently have been directed to improve children’s access to zinc in management of diarrhea and to pilot delivery of micronutrient powders (MNPs) integrated with community infant and young child feeding (IYCF) to improve anemia and stunting in children.

Sanjogta Thapa Magar has done MSc in food microbiology from St. Xavier’s college. Currently, she is working as a Quality control microbiologist in the pharmaceutical industry. She is particularly interested in studying the antimicrobial property found in food.