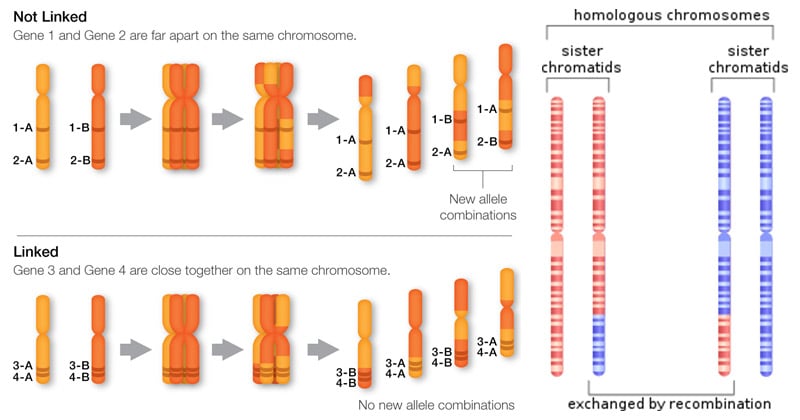 Morgan along with Castle formulated the chromosome theory of linkage which is as follows:

Example. The incomplete linkage has been reported in female Drosophila and various other organisms such as tomato, maize, pea, mice, poultry and man, etc.

Incomplete Linkage in maize. In Zea mays (maize) a case of incomplete linkage between the

alleles for colour and shape of the seed has been observed by Hutchison. When a maize plant with seeds having coloured and full endosperm (CS/CS) is crossed with another plant having recessive alleles for colourless, shrunken seeds (cs/cs), the F1 heterozygotes are found with the phenotype of coloured full and genotype of CS/cs. When F1 hybrid is test crossed with double recessive parent (cs/cs) four classes of descendants are obtained instead of two. The test cross results are clearly showing that parental combination of alleles (e.g., CS/cs and cs/ cs) are those expected from complete linkage and appear in 96% cases, the other two are new combinations (e.g., Cs/cs and cS/cs) and appear in 4% cases. Thus, in 4% cases crossing over has occurred between linked genes.

The phenomenon of linkage has one of the great significance for the living organisms in that it reduces the possibility of variability in gametes unless crossing over occurs.