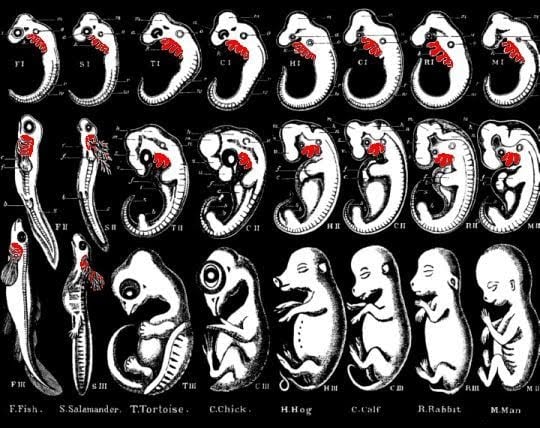 Karl Ernst von Baer, a Russian scientist, made observations on embryos of different species and came up with four principles of comparative embryology:

The first principle states that general characteristics appear earlier than specialized ones, and so a general, homologous structure would exist in the early embryos of groups of similar species. This would infer these organisms had a common ancestor, and different species “branched off” from it.

The second principle states that embryos develop from a simple structure to a complex organism. Von Baer argued against preformation with this theory, as it explains how embryos of similar groups of organisms developed in a similar way and differentiated from a similar structure, thus the organisms must be linked to a common ancestor.

Von Baer argued against the recapitulation theory with the third and fourth principles.

The fourth principle that describes the resemblance of different embryos of higher and primitive ones reaffirms the idea that higher animals are related to primitive animals, and must have shared an ancestor.