Aurelia is commonly referred to as jellyfish because it is made of a jelly-like substance. A jellyfish is not true fish which is a vertebrate animal with a backbone. It belongs to the class Scyphozoa of phylum Coelenterata. The most common scyphozoan jellyfish is Aurelia aurita (popularly known as moon jelly). It represents the dominant medusoid stage. 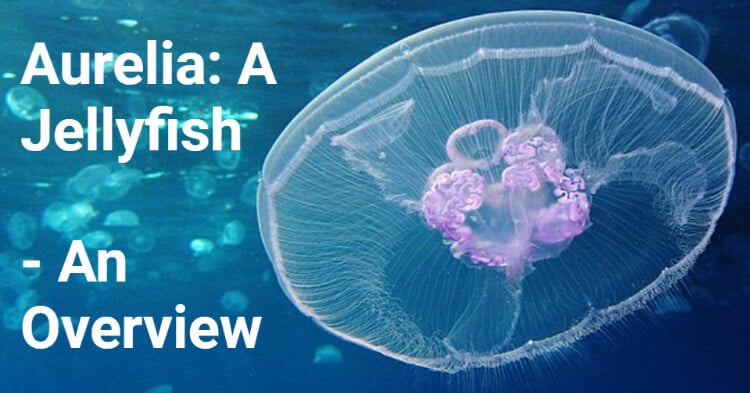 Habit and Habitat of Aurelia (Jellyfish) 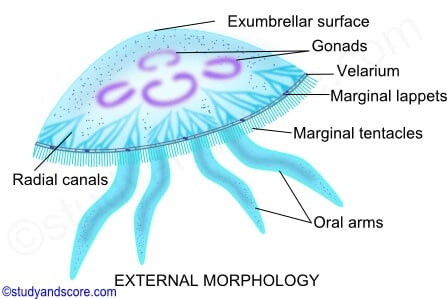 The basic histological plan of Aurelia medusa is more or less the same as that of the Obelia medusa. It is diploblastic and derived from two embryonic layers, ectoderm and endoderm.

They occur on oral arms, ex- and subumbrellar surface, marginal tentacles, as well as gastric filaments. They are of 3 types:

1. Atrichous isorhizas: Capsule is elongated. The thread tube is open at the tip and is without a butt and spines.

2. Holotrichous isorhizas: Capsule is oval and butt is narrow. The thread tube is long, open at the tip, and armed with a spiral row of small spines.

3. Heterotrichous microbasic euryteles: Capsule is small. The thread tube is open at the tip and covered by minute spines. The butt is short nad its distal dilated portion bears unequal spines.

Musculature and locomotion of Aurelia (Jellyfish)

Circulation of water in Aurelia (Jellyfish)

Respiration and excretion of Aurelia (Jellyfish)

It consists of the a. main nerve net, b. a diffuse nerve net, and c. 8 rhopalial ganglia

The sense organs of Aurelia are 8 rhopalia which are situated one in each of the per-and interradial marginal notches. each rhopalium comprises tentaculocyst or statocyst, 2 ocelli, and 2 olfactory pits.

Aurelia is dioecious i.e., the male and female sexes are separate but there is no sexual dimorphism. 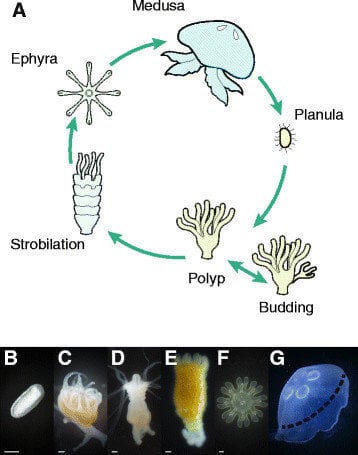 Figure: Life-cycle stages of Aurelia. (A) Life-cycle scheme depicting sexual reproduction of mature medusa and asexual proliferation of the polyp. (B − G) Photographs of the six analyzed stages: planula (B), polyp (C), early strobila (D), advanced strobila (E), ephyra (F), and mature medusa (G). The dashed line in G represents the excised part of the medusa that was used for RNA-seq. Bar in B, 50 μm, and in C − F, 500 μm. Image Source: Vera Brekhman et al. 2015.