Differences between terminologies used in Microbiology 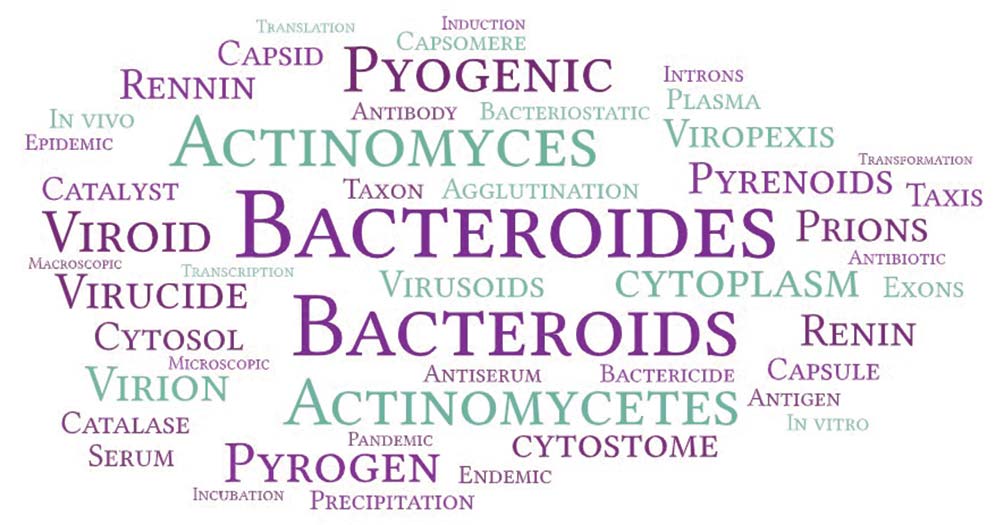 Bacteroides = It is a Gram-negative obligate anaerobic bacteria.

Bacteroids= It is the morphological form of the nitrogen-fixing bacteria like Rhizobium which is irregular shaped and is present in the root nodules of legumes.

Actinomyces = It is the genus of Actinomycetes. It causes actinomycosis. It is mostly anaerobes and non-acid fast.

Actinomycetes = It is a group of Gram-positive bacteria that is characterized by the formation of branching filament. It can be aerobic and anaerobic. It can be acid-fast or non-acid fast.

Pyrogen = It is the chemical that regulates body temperature.

Pyrenoids= The dense regions in the chloroplast on which surface starches granules form.

Viropexis= It is the phagocytic process in which there is the engulfment of whole virions by cells.

Virucide= Any agent that kills the virus is called virucide.

Cytosol = It is the part of the cytoplasm which contains the intracellular fluid inside the cells.

Cytoplasm= It is the part of the cell present within the cell membrane except for the contents of the nucleus of the cell.

Cytostome = It is the opening through which food is ingested in ciliates.

Virion = It is the complete mature and functional virus particle which has the capacity to infect living tissue.

Viroid = It infects only plants and is smaller than the virus. It is devoid of the capsule. It is a single-stranded and infectious RNA molecule.

Virusoids= The genetic material present in virusoids is RNA which can be of a different shape. It can be linear or of circular shape. It requires the virus-infected cell for replication as it cannot replicate itself.

Prions= It is an infectious protein. It is a misfolded protein that triggers the normal protein and causes disease by folding it abnormally.

Rennin= It is an enzyme. It regulates blood pressure and is secreted by the kidney.

Renin = It is a hormone. It controls blood sodium levels and is produced by the kidney.

Catalase = It is the enzyme that converts Hydrogen peroxide to water and oxygen.

Catalyst= It is the substance that accelerates a chemical reaction but remains unaltered in form and amount.

Capsid = It is the protein coat of the virus.

Capsomere = It is the morphological subunit of the capsule.

Capsule= It is the envelope or slime layer surrounding the cell wall of certain microorganisms.

Bactericide= It is the agent that kills or destroys the bacteria.

Bacteriostatic= It is an agent that doesn’t kill but can inhibit the growth of bacteria.

Serum = It is the blood plasma without the clotting factors. It is the part of blood containing fluid and solute components containing all proteins which are not used in blood clotting. It contains antigen, antibody, electrolytes, hormones, microorganisms and drugs. It doesn’t contain erythrocytes (red blood cells), leukocytes (white blood cells), clotting factors, or platelets.

Plasma = It is the fluid portion of the blood which is a yellowish liquid that contains the blood cells in the suspension of whole blood.

Antiserum = It is the blood serum which contains the antibodies.

Antibody = It is a class of protein that is produced in the animal’s body in response to an antigen by the immune system of the body.

Antibiotic = A substance of microbial origin or which can be synthesized chemically which has antimicrobial activity (which works against the microbes ).

Antigen = Any substance which when introduced in the animal’s body stimulates the production of antibodies.

Endemic = The presence of disease in a particular geographic region.

Epidemic= The sudden increase in the spread of disease from a particular geographic region.

Pandemic= The worldwide spread of the disease like the Coronavirus (SARS-CoV-2).

Taxis= In response to the physical or chemical stimulus, there is a movement which might be away from or towards the stimulus, it is called taxis.

Taxon= It is a taxonomic group such as family, genus, and species.

Transcription=  It is the process of formation of the mRNA from the DNA.

Translation= It is the process of protein synthesis by the assembly of specific amino acids.

Transformation= It is the incorporation of DNA by the bacteria.

Incubation = It is the process of providing the conditions ( like temperature) suitable for the growth of microorganisms.

Induction = The production of an increase in the rate of synthesis of an enzyme, generally by the enzyme’s substrate or closely related compound.

Microscopic= Which cannot be seen with the naked eyes.

Macroscopic = This can be seen with the naked eyes.

In vivo and In vitro

In vivo= The laboratory test which is performed within the body of living organisms.

In vitro = It is the test that is performed in the test tubes or other laboratory vessels.

Introns = It is the non-coding part of the gene.

Exons = It is the coding part of the gene.

Differences between terminologies used in Microbiology

1 thought on “Differences between terminologies used in Microbiology”