Microorganisms play an important role in causing infection and contamination. Therefore, Sterilization is an important technique in microbiology which helps to remove or destroy microorganisms from materials or surfaces.

It is the process by which an article, surface or medium is made free of all microorganisms either in vegetative or spore form.

It refers to the destruction of all pathogens or organisms which can cause infection but not necessarily spores. All organisms may not be killed but the number is reduced to a level that no longer harmful to health.

These are chemical disinfectants that are safe to apply on living tissues and used to prevent infection by arresting the growth of the microorganism.

This refers to the technique which helps to prevent the occurrence of infection into an uninfected tissue. 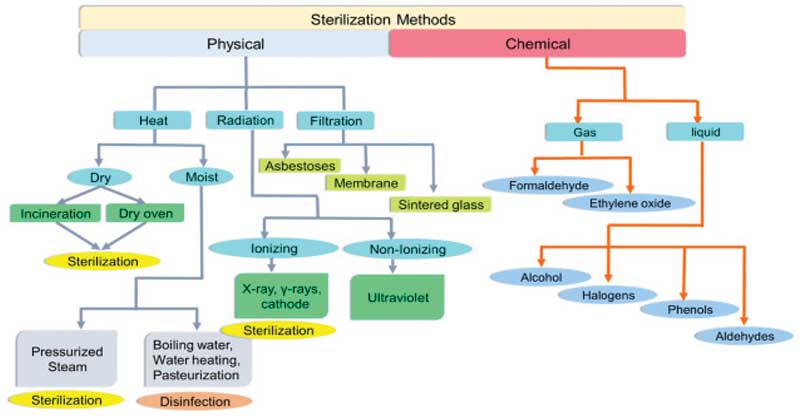 Sunlight has an active germicidal effect due to the presence of ultraviolet rays. It is a natural procedure of sterilization which reduces the number of microorganisms in water tanks, lakes, etc.

Heat is a mostly used method of sterilization. Moreover, it is a highly effective and most reliable process. There are two major methods of using heat in sterilization which are dry heat and moist heat. The principle behind both of these methods is similar. Dry heat induces the denaturation of protein, oxidative damage and toxic effect due to the high level of electrolytes. Moreover, the dry heat can also damage the DNA of the microorganism. As a result, the microorganism got killed. Moist Heat kills the microorganisms by denaturation and coagulation of proteins. There are several factors that can influence the heat killing procedure. Such as

Inoculation loops, wires, forceps tips, needles are needed to be sterilized to inhibit microbial contamination. These instruments are held in the flame of a Bunsen burner until they become red hot.

Glass slides, scalpels, and mouths of culture tubes or conical flasks are passed through Bunsen flame without allowing them to become red hot.

This procedure is used to reduce the infective material into ashes by burning. The incinerator is used for the process. Soiled dressings, animal carcasses, bedding, and pathological materials are dealt with this method.

It is a widely used method of sterilization by dry heat. The heat inside the oven is maintained by electricity and a fan fitted inside it provides the adequate distribution of hot air inside the chamber. A thermostat is also connected which maintains the temperature inside the chamber. 1600C for two hours is required for sterilization. There are also some alternative temperatures and holding time which include 1700C for 1 hour and 1800C for 30 minutes.

There are two different types of pasteurization methods that are used for sterilization of milk, Holder method (63oC for 30 minutes) and flash method (720C for 20 seconds followed by cooling quickly to 130C). This method is effective against all non-sporing pathogens such as mycobacteria, Salmonella, etc. except Coxiella burnetii which survives the holder method due to heat resistant characteristics.

Media like Lowenstein- Jensen’s and Loeffler’s serum are required to sterile at 80-850C for 30 minutes daily on three consecutive days. This process is known as inspissation and the instrument used is called inspissator.

It is used for sterilization of bacterial vaccines at 600C for one hour. Serum or other body fluids can be sterilized by heating in a water bath at 560C for several successive days.

This method is applicable for materials that cannot withstand 1000C temperature. In this method, steam at subatmospheric pressure at 750C with formaldehyde vapor is used. Bacillus stearothermophilus plays an important role as a biological control to test the efficacy of the test.

It is an effective method that can kill vegetative cells. Boiling for 10-30 minutes can kill most of the vegetative cells; however, many spores can withstand this temperature. Boiling can be employed when adequate methods are not available to sterilize glass syringes, rubber stopper, etc.

In this case, steam at 1000C for successive 3 days is used. It is also known as intermittent sterilization. In this case, the first exposure kills the vegetative forms, and in the intervals between the heating and remaining spores germinates into vegetative forms which are killed on subsequent heating. This process is applied for sterilization of egg, serum or sugar-containing media which can be damaged due to exposure in high temperature for a longer period.

Koch’s and Arnold’s steam sterilization is usually used for media which can easily decompose due to the high temperature in the autoclave. Those media are kept on a perforated tray and steam at 1000C and at atmospheric pressure passes through the media for 90 minutes. It is an effective method to kill vegetative cells.

Temperature above 1000C (under pressure)

Steam above 1000C or saturated steam has a better killing capacity than dry heat. Bacterial proteins coagulate rapidly at moist heat. Saturate steam has the ability to penetrate any porous material. When steam comes into contact with the cooler surface it condenses into water and releases its latent heat to the surface. The large reduction in volume sucks in more steam to the same site and the process continues until the temperature of the substance raised to that of steam. The condensed water produced moist conditions for killing the microbes present.

The autoclave is a modified pressure cooker which contains a vertical or horizontal cylinder. The cylinder is made up of stainless still. A lid on the cylinder is placed and fastened by screw clams to make it airtight. The lid contains a steam discharge unit, a pressure gauge, and a safety valve. Moreover, a thermostat is present to monitor the temperature. Heat is produced by electricity. At the time of sterilization, the cylinder is filled with an adequate amount of water and it is kept for some time for preheating. After that, the materials which are needed to be sterilized are inserted into the cylinder and the lid is then closed tightly. The temperature will increase eventually along with the pressure. When the temperature reaches 121.10C and the pressure at 15 psi the sterilization is performed for 15 minutes.

Ozone sterilizer uses oxygen, water, and electricity to produce ozone within the sterilizer and provide sterilization without producing toxic chemicals. It runs at 25-350C temperature.  Inside this device, the oxygen is converted into atomic oxygen due to the intense electrical field. The atomic oxygen is then combined with the oxygen molecule to produce ozone.  The ozone provides a sterility assurance of 10-6 in approximately 4 hours.

This process is useful for sterilizing those materials which are unable to withstand heat. There are several types of filters such as

A limitation of using the filtration process is that the pores are not small enough for viruses.

It is known for its bactericidal, sporicidal and virucidal activities. It can be used in both aqueous and gaseous form. A 10% formalin solution is a standard chemical disinfectant. It is used for

It has its activity against bacteria (Mycobacterium tuberculosis), fungi and viruses (including HIV, hepatitis B, etc). It can also kill spores and is known for its less toxic nature. It is used as a 2% buffered solution. Glutaraldehyde is used for

Orthophathalaldehyde (OPA) is a high-level disinfectant and is known for its stability during storage. It has bactericidal effects against mycobacteria. 0.5% OPA is slowly sporicidal and OPA vapors irritate the respiratory tract and eyes, therefore, it must be handled with appropriate safety.

Lister (father of antiseptic surgery) used phenol for the first time in the sterilization of surgical instruments.  Phenols work as a disinfectant and kill microorganisms by cell membrane damage. It is toxic for the skin. Different derivatives of phenol are used as antiseptics which are following

An example of cresol is Lysol which is mostly used for sterilization of infected glasswares, floors, etc.

Savlon is an example of a chlorhexidine solution which is widely used in wounds, preoperative disinfection of the skin. It is bactericidal at high dilution. Moreover, it also has fungicidal activity.

Dettol is commercially available as a chloroxylenol solution. It is less toxic and less irritant.

It is bacteriostatic at very high dilution.

Chlorine and iodine are commonly used disinfectants. Chlorine is used in water supplies, swimming pools, food, and dairy industries. Chlorine compounds in the form of bleaching powder, sodium hypochlorite, and chloramines. The disinfection action of all the chlorine compounds is due to the release of free chlorine which becomes a strong oxidative agent.

Iodine in alcoholic and aqueous solution is used as a skin disinfectant. It is active against M tuberculosis and slightly active against spores. Compounds with iodine with surface-active agents known as iodophors are claimed to be more active than aqueous or alcohol solution.

It is effective against most organisms in the concentration of 3-6 %. However, it kills spores at higher concentrations (10-25%). The mode of action is by the liberation of free hydroxyl radical on the decomposition of hydrogen peroxide. These free radicals are active ingredients in the disinfection process.

It is an oxidizing agent and is a more potent germicidal agent than hydrogen peroxide.

Slats of heavy metals have a toxic effect on bacteria. The salts of copper, silver, and mercury are used as a disinfectant. They are protein coagulant ant act by combining with sulphydryl groups of bacterial proteins and other essential intracellular compounds. Merthiolate (sodium ethyl mercurithiosalicylate) is used in a dilution of 1:10000 for the preservation of sera.

It is a colorless liquid with a boiling point of 10.70C. It is effective against all types of microorganisms including viruses and spores. It acts by alkylating the amnio carboxyl, hydroxyl and sulphydryl groups in protein molecules. In addition, it reacts with DNA and RNA. It is specially used for sterilizing plastic and rubber articles, respirators, heart-lung machines, dental equipment, etc.

This is a condensation product of ketane and formaldehyde. It has rapid action and used in0.2%. It is more efficient in fumigation than formaldehyde. BPO is used for the inactivation of vaccines.