Home » Diseases » Plague and its forms caused by Yersinia pestis

What is the Plague?

Plague, a term originally applied to any widespread disease which causes great mortality. The name is now confined to Bubonic Plague, an infectious disease of animals and humans caused by the bacterium Yersinia pestis.

In AD 541, the first great plague pandemic spread throughout the world from its origins in Egypt. Being spread by the Flea-infested rodents that inhabited human homes and workplaces it is thought to have killed between 50% and 60% of the population over four years.

In the early 1330s, a second plague pandemic originated in China. It entered Europe in October 1347. In August the following year, the plague had spread as far north as England, where people called it the Black Death because of the black spots on the skins of patients. After five years more than 13 million people in China and 20–30 million in Europe, one-third of the European population, were dead.

The Great Plague of London in 1664 to 1666 is estimated to have killed 70,000 people. In 1894, outbreaks occurred in Canton and Hong Kong. Within 20 years the plague had spread and killed 10 million people worldwide.

The World Health Organization reports 1000 to 3000 cases of plague annually.

Mongolia city in China is on high alert as on July 2020 due to a confirmed outbreak of Bubonic Plague. A 15-year-old teen in western Mongolia has died after eating marmot. Now there is a risk of the human plague epidemic spreading across Mongolian cities.

Yersinia pestis a zoonotic bacterium is the causative agent of Plague.

Morphology: Yersinia pestis is a gram-negative rod-shaped bacteria that exhibit bipolar staining with special stains such as Wright, Giemsa, Wayson, or methylene blue stains. It is non-motile. It grows as a facultative anaerobe on many bacteriological media. It grows more rapidly in media containing blood or tissue fluids and incubation temperature is at 30°C. When culturing on blood agar at 37°C, colonies may be very small at 24 hours.

Identification: A bacterial inoculum, derived from infected tissues of patients produces gray and viscous colonies, but after passage in the laboratory, the colonies become rough and irregular. The bacterium has less biochemical activity, and this is somewhat variable. 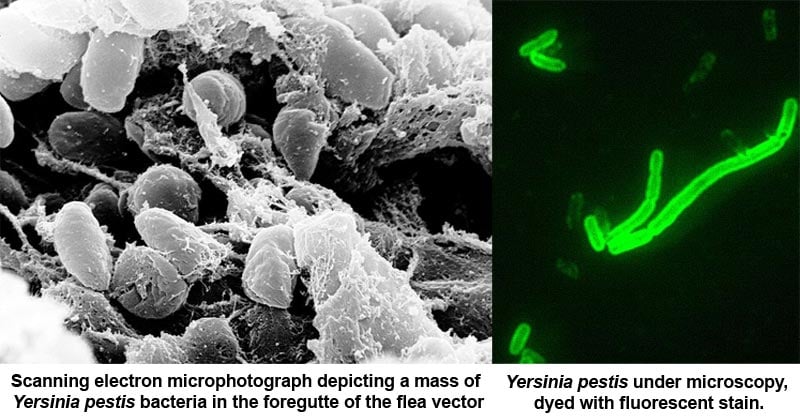 There are three forms of Plagues: Bubonic plague, Septicemic plague, Pneumonic Plague. The difference between these three forms is the location of the infection in the human body.

It is caused by Yersinia pestis bacterium which mainly spread by infected fleas that feed on wild infected rodents.

This plague is also called as Black Death that swept off Asia, Europe, Africa in mid centuries.

After the bite of an infected flea on human skin, the bacterium enters through the skin into lymphatic vessels until it reaches lymph nodes and colonize there and increases their number resulting in the appearance of buboes which is an inflammation of lymph nodes. It is large in size and painful. Buboes are found in the groin, armpits, neck region, and upper femoral regions.

Symptoms: The signs and symptoms appear generally after 2 to 7 days after the infection. Chills, Headache, Fever, Fatigue, Muscle cramps, Seizures, the appearance of Buboes, Gangrene of toes, fingers, nose.

Additional Symptoms: Coughing, continuous vomiting of blood, aching limbs, unbearable pain due to the decaying of skin while the person is still alive. Gastrointestinal problems, Heavy breathing, Black spots all over the body (called Lenticulae), Coma, and death.

Diagnosis: A fluid sample is taken from the buboes with a needle and bacteria are cultured in the lab. Confirmation is by observing bacterial colonies.

It is the second form of the plague, also caused by the Yersinia pestis bacterium.

It is mainly associated with fatal infection of the blood.

When an infected flea bites a person, the bacteria enter through the skin and reach the lymphatic system and reproduces.

Lymphatics drain into the bloodstream and the bacteria from lymph reaches most of the body parts and spreads infection.

Usually, bubonic plague leads to blood infection which results in a septicemic plague.

Gangrene (Blackening and death of tissue) in extremities most commonly fingers, toes, and nose of patients.

In some cases, the patient usually dies the same day when the symptoms appear.

Diagnosis: Serum is collected from patients and rapid dipsticks tests are done to detect antibodies.

Treatment: Antibiotics such as ciprofloxacin, gentamycin, streptomycin, doxycycline are used in treatment. Intravenous drip may be used to assist in dehydration.

It is the third form of plague, caused by Yersinia pestis bacterium.

It is associated with a severe lung infection.

Primary Pneumonic plague: It occurs when a healthy person inhales aerosols or respiratory droplets containing bacterium when an infected person coughs or sneezes.

Secondary Pneumonic plague: It occurs in patients following the bubonic plague and septicemic plague when bacteria enter into the lungs from the bloodstream.

The incubation period maybe 2 –4 days or even just a few hours from the onset of illness.

Diagnosis: Collection of sputum and swab tests from infected patients, Endoscopy (a thin flexible tube is inserted through the nose or mouth and fluid from airways is collected) is performed.

Treatment: It is a very aggressive infection and requires treatment within 24 hrs. Chloramphenicol, streptomycin, gentamycin, tetracycline are used to treat pneumonic plague.

Prophylaxis: People who have been in direct contact with infected persons must be treated with prophylactic antibiotics for up to 7 days.

Active specific immunity is induced by the administration of antigenic material via various routes to people. This is called the Immunization.

Primary vaccination: Children greater than or equal to 11 yrs old and adults are given 3 doses of vaccine in series. The first dose of 1ml and after 4 weeks second dose of 0.2ml, third dose of 0.1ml is administered after 6 months of the first dose.

Children less than are equal to 10 yrs old are also given three doses with equal intervals as adults but the quantity of the dose is much less.

The vaccine is not currently available in the United States due to poor efficacy against pneumonic plague.

Removal of junk materials, piles of rocks, brush, any foods that are eaten by rodents, waste bins must be cleaned regularly.

During outside activities like hiking and camping use flea repellants.

Use rodent traps and dispose of the dead animal bodies safely by wearing gloves.

DEET products and permethrin products can be applied to skin and clothes to repel fleas.

Keep the fur of pets clean regularly and check for fleas, if the pet gets sick take to the veterinarian immediately.

People infected with pneumonic plague must be isolated and treated.

Health authorities must be notified immediately if there is a new case in any particular area.

1 thought on “Plague and its forms caused by Yersinia pestis”