1) Measuring the uptake of CO2

2) Measuring the production of O2

3) Measuring the production of carbohydrates

4) Measuring the increase in dry mass 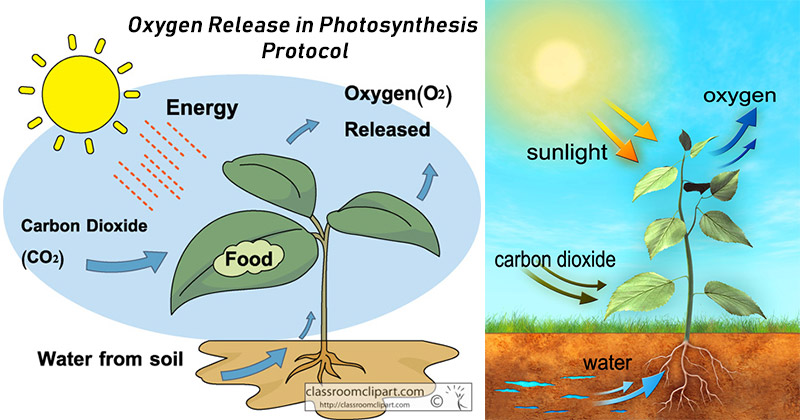 Principle of Oxygen Release in Photosynthesis

During oxygenic photosynthesis, light energy transfers electrons from water (H2O) to carbon dioxide (CO2), to produce carbohydrates. In this transfer, the CO2 is “reduced,” or receives electrons, and the water becomes “oxidized,” or loses electrons. Ultimately, oxygen is produced along with carbohydrates.

Oxygenic photosynthesis is written as follows:

Here, six molecules of carbon dioxide (CO2) combine with 12 molecules of water (H2O) using light energy. The end result is the formation of a single carbohydrate molecule (C6H12O6, or glucose) along with six molecules each of breathable oxygen and water.

Oxygenic photosynthesis functions as a counterbalance to respiration by taking in the carbon dioxide produced by all breathing organisms and reintroducing oxygen to the atmosphere.

In the lab, the evolution of oxygen can be detected by using a plant (most commonly aquatic) which is provided with water, carbon-dioxide and exposed to an appropriate light source such that it can carry out photosynthesis. A small amount of sodium bicarbonate added to the water solution serves as the carbon source for photosynthesis that is, the bicarbonate serves as an alternate dissolved source of carbon dioxide. On exposure to light, photosynthesis proceeds and oxygen is released. This release of oxygen can be seen in the form of gas bubbles which can be counted to determine the rate of the process or collected, analyzed and measured later.

Procedure of Oxygen Release in Photosynthesis

PART A. Setting up the Experiment

PART B. Running the Experiment