Microbial toxins are metabolites produced by a specific microorganism during its growth or life cycle. Mycotoxins are secondary metabolites produced by several fungi that have a severe impact on human or animal health. The mycotoxins are not only responsible for causing disease but it can also lead to long term damage to humans or animals and finally, the death of the host is also possible. Fungi or molds are important microorganisms related to food spoilage. Several food items can be affected by different molds. Therefore, mycotoxins in food have become a crucial aspect of whole food processing and preservation. The article will describe different Mycotoxins related to food items, crops, fruits, etc. 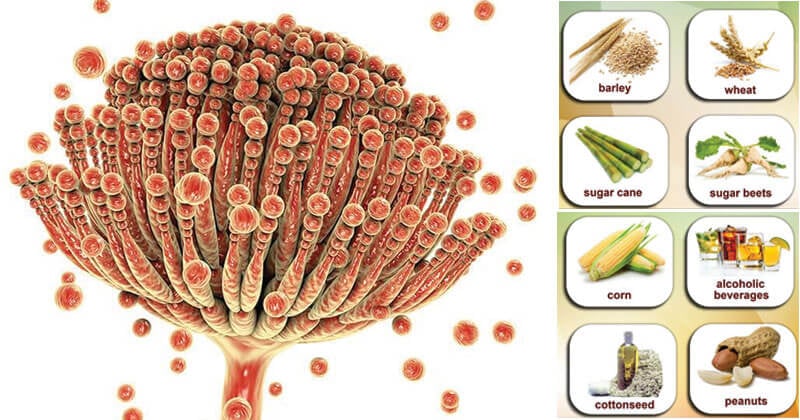 Different strains of Aspergillus flavus and Aspergillus parasiticus are responsible for the production of aflatoxins. However, all the strains of the mentioned fungi are not involved in the production of this type of mycotoxin. A. flavus and A. parasiticus can grow in a variety of food substrates at a mesophilic environmental condition and aflatoxins are produced optimally at the temperature range 280C to 400C. The common food items which can be affected by A. flavus and A. parasiticus are barley, corn, peanuts, rice, soybean, wheat, peas, soybean meal, peanut meal, etc.

The structural analysis of aflatoxins results in two major structures such as B1 and G1. These are named in such a way because of its capability to transmitting blue (B1) and green (G1) when exposed to long-wavelength UV light. Apart from these two types, there are B2 and G2 which are identified as the dihydroderivatives of the previous structures. Later many different closely related aflatoxins were identified such as B2a, G2a, GM1, M1, M2, P1, etc. The structural similarity of these aflatoxins is the presence of the oxygenated heterocyclic ring. Among all these types of aflatoxins, B1 was reported to have the most toxic effect on cattle, poultry birds, turkeys and also reported to have carcinogenic effects on sheep, mice, ducklings, etc.

Patulin is a metabolite which was previously identified as an antibiotic produced by several species of Penicillium such as P. expansum, P. patulum, P. melinii, P. cylopium, etc. Later molds like Aspergillus giganteus, A. terreus were also reported for the production of Patulin. The chemical structure of patulin resembles with clavacin, penicidin, claviformin, myocin C, gigantic acid, etc. It is found as a white crystallized form in the pure state which has a melting point of 110.5°C.

Previously it was reported as an antibiotic due to its activity against several bacteria such as E. coli, S. aureus, etc. Later studies reported its toxic effect in higher plants such as beets, corn, wheat, peas, tomato, cucumber, etc. Animal studies were also reported which supports its toxic activity in animals. Oral and intravenous application of patulin in high concentration in mice and rats were found to be fatal. Several studies have also reported the potential of patulin to be a human carcinogen. Patulin is isolated mostly from apple juices and apples which are affected by P. expansium. It is one of the common organisms responsible for spoilage of different fruits. Due to highly toxic and carcinogenic effects, patulin is considered as one of the major hazards related to food preservation and processing.

A number of different molds were reported for the production of Ochratoxin A, the molds include Aspergillus ochraceus, A. carbonarius, A. niger, Penicillium verrucosum, etc.

There are a variety of food items starting from cereal grains to dried fruits which can be a source of Ochratoxin A. It is a microbial metabolite with high chemical stability which makes it evade the regular food processing precautions. The structural analysis reported it as chlorinated isocoumarin derivative with an amide bond to phenylalanine.

It is highly toxic for several animals. Exposure of ochratoxin A can lead to nephrotoxicity and renal tumors in different animal species such as rats, ducklings, etc. In the case of humans, ochratoxin A targets mostly the kidney and is responsible for Balkan endemic nephropathy, chronic interstitial nephropathy along with other renal diseases. Due to its chemical stability, high toxic nature, presented in a huge range of food items Ochratoxin A is an important mycotoxin related to food processing and preservation.

Leuteoskyrin is a secondary metabolite produced by the fungus Penicillium islandicum. The organism is mostly related to spoilage of rice and flour. It leads to yellowish colorization in rice and flower. There are no reported studies that can support its toxic effects on humans. However, it is found to be toxic and carcinogenic in mice.

Penicillic acid is a secondary metabolite produced by different Aspergillus and Penicillium species. Examples of the fungi which are reported for the production of Penicillic acid are A. ostianus, A. alliaceus, A. melleus, P. cyclopium, P. commune etc. The food items which serve as the source of penicillic acid include corn (stored in high moisture and low temperature), beans, tobacco, etc. It was reported to have low toxicity. However, it also reported showing carcinogenic effects in rats and mice. The carcinogenic effects are not as severe as in the case of aflatoxin.

It is a type of mycotoxin chemically derived from diketopiperazine and the common fungi which are reported for the production of roquefortine are Penicillium roqueforti. It is one of the common compounds related to spoilage of beer, wine, meats bread, and cheese. In high concentrations, it was reported for its neurotoxic activity. Apart from that it also has some bacteriostatic activity which reduces the bacterial load in cheese and bread.