Mycolic acid is the cell wall that contains α-alkylated β-hydroxylated fatty acids present in Mycobacteria, Nocardia, and Corynebacteria. Mycolic acids are the main component of the cell wall of Mycobacterium spp and plays important role in the virulence and permeability of the outer membrane. To control the cell fluidity, trans-cyclopropanes are present in Mtb in mycolate series but in virulent series, oxygenated forms are present along with trans-cyclopropane. Disrupting the mycolic acid pathway with the help of effective treatment is a great task and proven therapy by the drugs like isoniazid, ethionamide, isoxyl, thiacteazone, and triclosan. 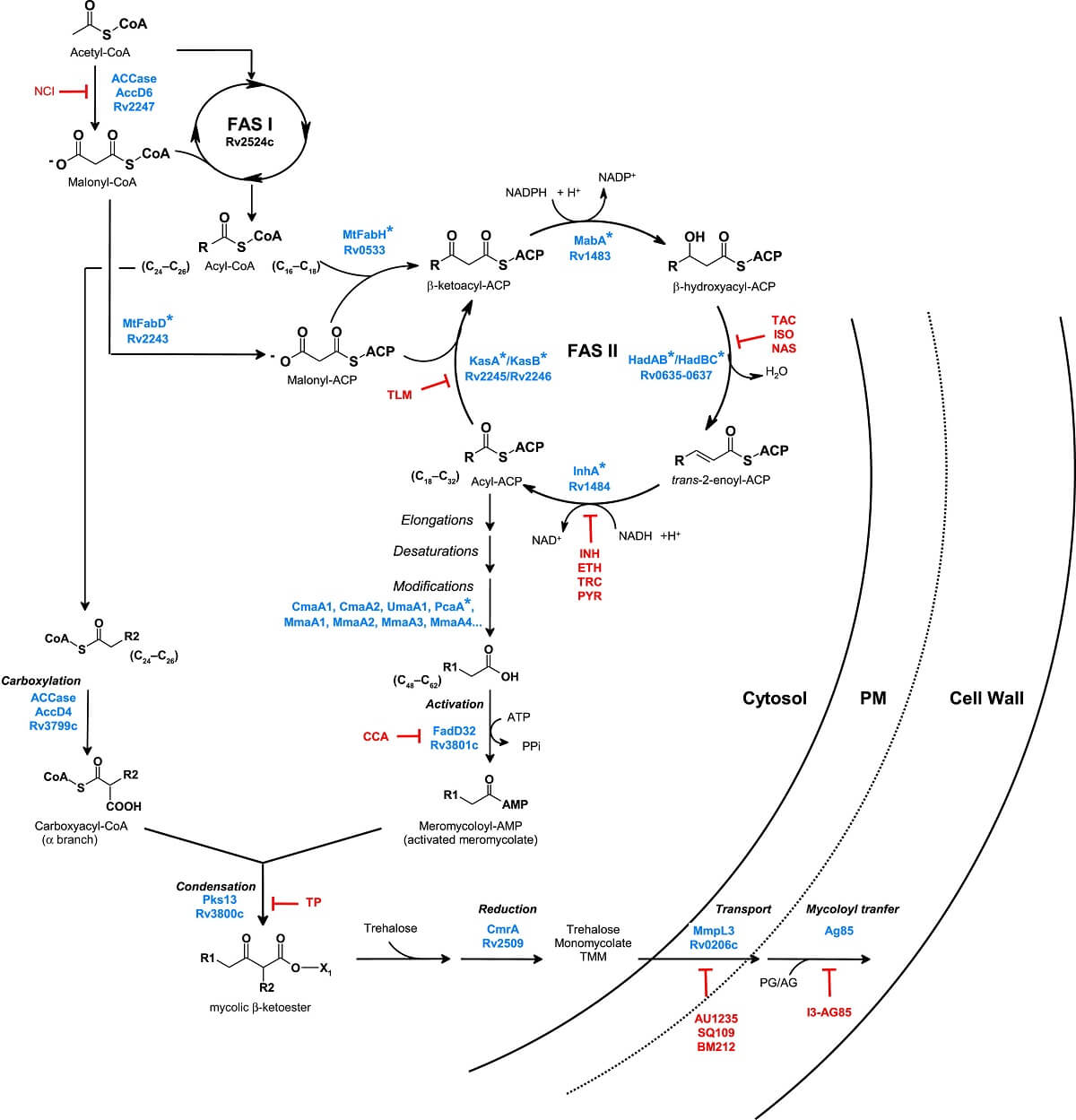 Isoniazid: It is mainly used to treat infections caused by Mycobacterium spp. and used with other antimicrobials to treat infections. It is manufactured from isonicotinic acid which was produced from methylpyridine. It is active against both extracellular and intracellular organisms which penetrate macrophages and inhibit organisms for multiplication. Its structure is similar to pyridoxine.

Ethionamide: It is the second-line anti-TB drug, an analog of isoniazid. It was isolated from Streptomyces orchidaceous. It is lipid-soluble and its activity is enhanced by the ethyl group. It is used in case of resistance of the first-line of anti-tubercular drugs. It is used in combination with isoniazid or streptomycin after the resistance showed against Mycobacterium tuberculosis.

Thioacetazone: An antibiotic that is used for the treatment of pulmonary tuberculosis. After the usage and discovery, its usage is reduced because of the toxicity seen in patients. 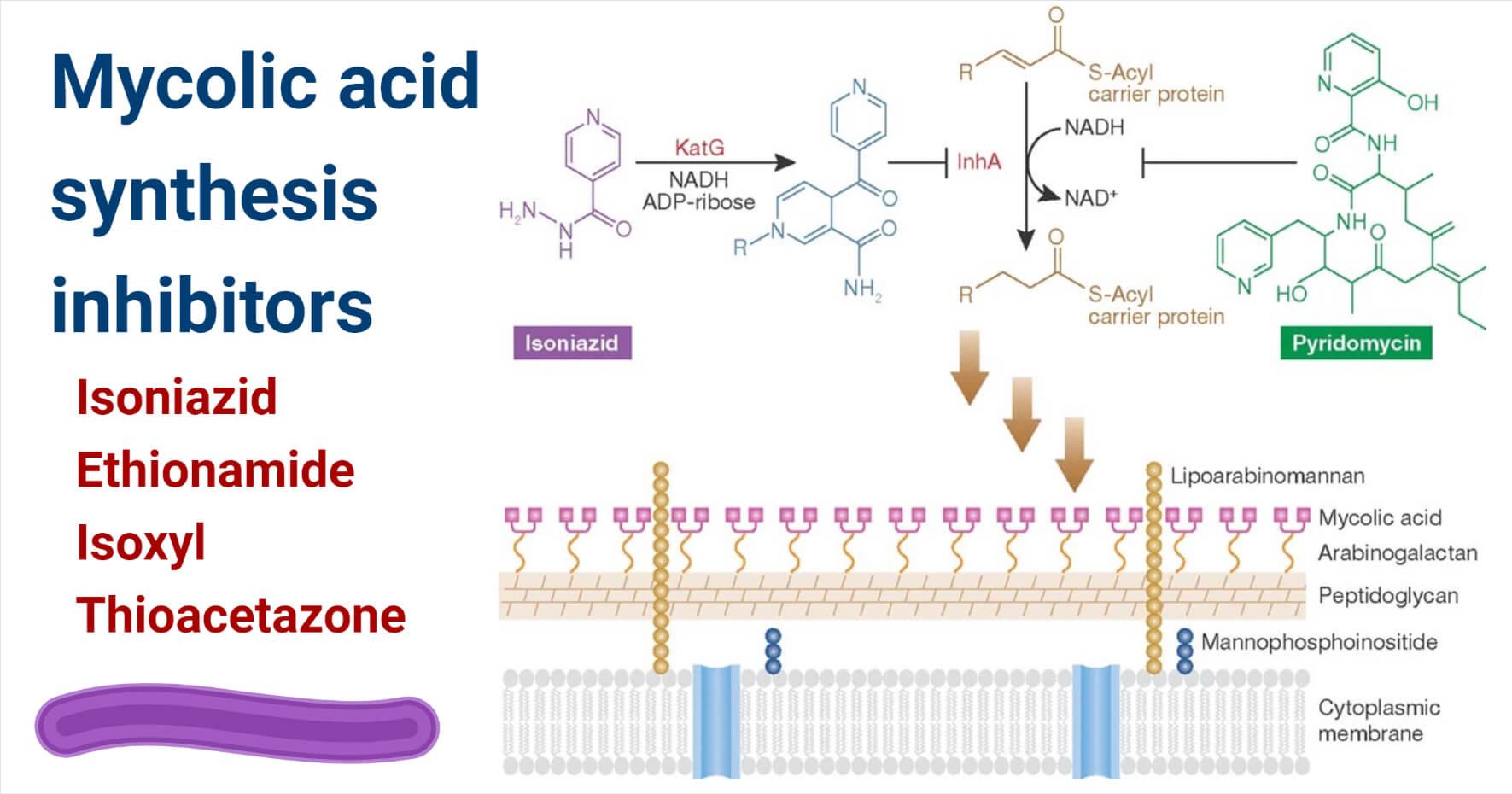 Isoniazid: Isoniazid is the first-line drug used to treat a mycobacterial infection that targets enoyl-ACP reductase. Catalase KatG is activated by isoniazid to a free radical form that binds to NAD forming an isonicotinyl NAD complex This formed complex is a reductase inhibitor, InhA.

Ethionamide: It acts similar to isoniazid is a nicotinic acid derivative that undergoes intracellular alteration. It requires oxidative activation done by EthA before inhibition done by InhA. Ethionamide reacts with NAD forming and ethionamide NAD complex that inhibits InhA. EthA is a FAD containing monooxygenase. Catalase peroxidase is converted into ethionamide sulfoxide upon oxidization with ethionamide. It further inactivates enoyl reductase and acylates cystine in InhA protein.

Thioacetazone: It is a weak antitubercular drug and it inhibits bacteria by mycolic acid cyclopropane synthesis. It inhibits cyclopropanaton of the cell walls which shows its bacteriostatic nature.

Mainly drug resistance occurs due to the efflux pumps and permeability barrier but here are some other reasons included;

Reeju Sharma completed her master's degree (M.Sc.) in medical microbiology from St. Xavier's College, Tribhuvan University, Kathmandu, Nepal, and did her bachelor’s degree (B.Sc.) in general microbiology. She is currently working in a pharmaceutical company as a Quality control officer.