The microbial cell is made up of several elements such as carbon, oxygen, hydrogen, nitrogen, sulfur, phosphorus, potassium, calcium, magnesium, and iron. These are also known as macro elements or macronutrients because these elements are required in high amounts by the microbes. Among these, C, H, O, N, S, and P are the major elements required for carbohydrates, lipids, proteins, and nucleic acids. Apart from these, the other macronutrients are found to have several biological functions. For example Potassium ions (K+) involved in the activity of several enzymes, Calcium (Ca2+) is an important element of bacterial endospores, Magnesium (Mg2+) involved as cofactors of different enzymes, etc.

On the other hand, several other elements are also required by the microbes on a small level which are known as microelements or micronutrients or traces elements. These nutrients include manganese, zinc, cobalt, molybdenum, nickel, and copper. These are not essential elements for the growth of the microbes but these are involved in biological functions in several ways. For example, zinc (Zn2+) is present at the active site of several enzymes, manganese (Mn2+) involved in catalysis of the transfer of phosphate group, Mo (Mo2+) is essential for nitrogen fixation, etc.

The requirement for Carbon, Hydrogen, Oxygen, and Electrons

The requirement for Nitrogen Phosphorus and Sulphur 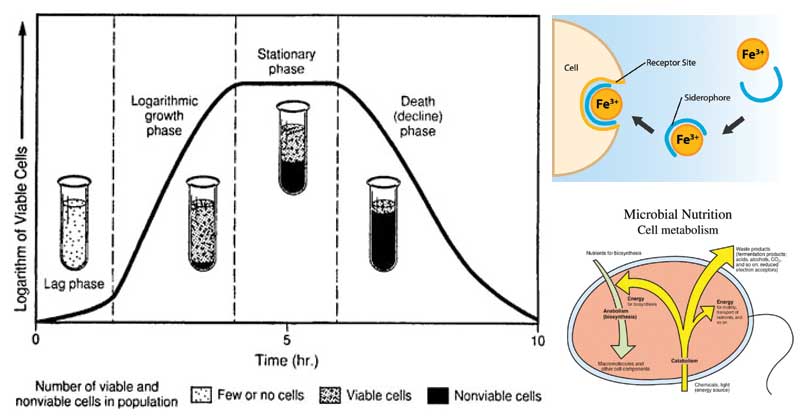 Most of the organisms are capable of producing enzymes required for biochemical pathways by the presence of nutrients; however, there are several organisms that lack specific enzymes required by the microbes. Therefore, they must obtain these constituents or their precursors from the environment. Organic compounds that are essential cell components or precursors of such components but cannot be synthesized by the organism are called growth factors.  There are three major types of growth factors such as Amino acids, purines, and pyrimidines and Vitamins. Some microorganisms require many vitamins; for example, Enterococcus faecalis needs eight different vitamins for growth. Other growth factors are also seen; heme (from hemoglobin or cytochromes) is required by Haemophilus influenzae, and some mycoplasmas need cholesterol.

Binary fission is the procedure by which microbial cell division occurs. The population of growth is understood by studying the growth curve. When microorganisms are cultivated in the liquid medium, they usually are grown in batch culture or closed system—that is, they are incubated in a closed culture vessel with a single batch of medium. Because no fresh medium is provided during incubation, nutrient concentrations decline and concentrations of wastes increase. The growth of microorganisms reproducing by binary fission can be plotted as the logarithm of the number of viable cells versus the incubation time. The resulting curve has four distinct phases

At first, the microorganisms are introduced in a fresh medium, in that medium, the organisms will not multiply immediately. Hence, the cell division does not occur at the very first moment. There can be several reasons behind this, such as old cells that lack adequate ATP molecules, ribosomes, essential co-factors to start the cell division, the characteristic of the medium can be different from the previous one, the microbes can be injured and required time for recovery, etc.

The lag phase varies considerably in length with the condition of the microorganisms and the nature of the medium. This phase may be quite long if the inoculum is from an old culture or one that has been refrigerated. Inoculation of a culture into a chemically different medium also results in a longer lag phase. On the other hand, when a young, vigorously growing exponential phase culture is transferred to a fresh medium of the same composition, the lag phase will be short or absent

It is the second stage of the microbial growth curve.  In this case, the microorganisms start dividing rapidly at its highest possible rate. The rate of division depends on the characteristics of the medium, genetic organization of the organism and other environmental factors. Their rate of growth is constant during the exponential phase; that is, the microorganisms are dividing and doubling in number at regular intervals. Because each individual divides at a slightly different moment, the growth curve rises smoothly rather than in discrete jumps. Uniform growth is observed throughout the exponential phase which helps the researcher to carry forward any physical or chemical activity studies in this phase of growth of microbes. Exponential growth is balanced growth. That is, all cellular constituents are manufactured at constant rates relative to each other. If nutrient levels or other environmental conditions change, unbalanced growth results. This stage is also known for the production of primary metabolites, which are elements produced by organisms essentially required for their growth. Primary metabolites are important to carry out physiological functions. Examples of primary metabolites are amino acids, nucleic acids, vitamins, etc.

After the log phase, the bacterial growth ceases almost completely due to the exhaustion of nutrients and the accumulation of toxic products. The number of progeny cells formed is just enough to replace the number of cells that die. The number of the viable cell remains stationary as there is almost a balance between dying cells and newly formed cells. Microbial populations enter the stationary phase for several reasons. One obvious factor is nutrient limitation; if an essential nutrient is severely depleted, population growth will slow. Aerobic organisms often are limited by O2 availability. Oxygen is not very soluble and may be depleted so quickly that only the surface of culture will have an O2 concentration adequate for growth. The cells beneath the surface will not be able to grow unless the culture is shaken or aerated in another way. Population growth also may cease due to the accumulation of toxic waste products. This factor seems to limit the growth of many anaerobic cultures (cultures growing in the absence of O2). For example, streptococci can produce so much lactic acid and other organic acids from sugar fermentation that their medium becomes acidic and growth is inhibited. Streptococcal cultures also can enter the stationary phase due to the depletion of their sugar supply. Finally, there is some evidence that growth may cease when a critical population level is reached. In phase secondary metabolites are produced by the organisms which are compounds with no direct connection with the growth of the organism. For example antibiotics, naphthalenes, alkaloids, etc.

After the period of the stationary phase, the bacterial population decreases due to the death of cells. The death phase starts due to the death of cells. The phase starts due to exhaustion of nutrients, accumulation of toxic products and autolytic enzymes. There is a decline in the variable count and not in the total count. With autolytic bacteria, even the total count shows the phase of decline.

4 thoughts on “Microbial Growth and Nutrition”