Inflammation is a well-managed constantly changing reaction comprehend by cellular and vascular activities. It comprises of movement of leukocytes (neutrophils, monocytes, basophils, etc.) to the injured site and discharge of stimulators and signaling molecules (histamine, serotonin, oxygen radicals, etc.) Each type of inflammation generated by different mechanisms.

Vascular events arouse via injury or infection and cause expansion of blood vessels allows entry of lymphocytes and perviousness also increased. Immune cells attracted to the damaged location via the release of chemotactic agents such as microbial endotoxin, leukotrienes, interleukins, etc.

Cellular proceedings include phagocytosis of foreign antigen, processing, and clearance from the damaged site. The prime phagocytic cell enters first is neutrophil which has various enzymes and proteins to kill the infecting agent and they also remove dead cell remains. 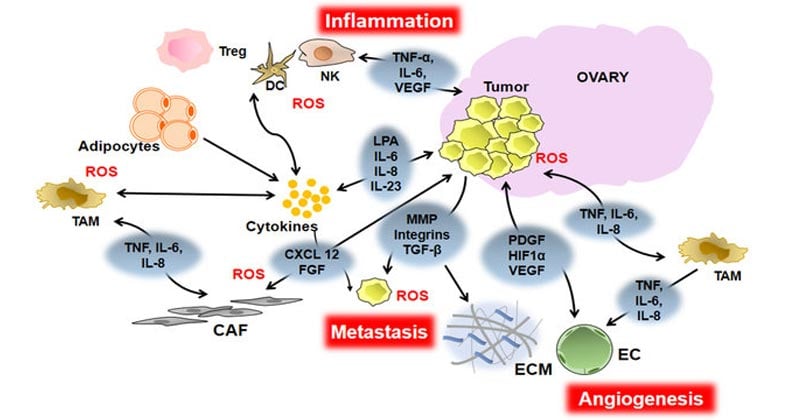 The inflammatory response is a combination of diverse chemical mediators from blood circulation, immune cells, and wounded tissue. These include vasoactive amines (histamine), peptides (bradykinin), and eicosanoids (leukotrienes).

These are a group of compounds contains an amino acid to modify the pervasiveness of blood vessels. There are two effective molecules are histamine and serotonin. They are known as beginning inflammatory mediators stored in mast cells.

Histamine is made by mast cells generally. Basophils and platelets also produced it by the decarboxylation of histidine amino acid. It releases due to the number of stimulators such as tissue damage, Fc receptor binding of IgE antibody to the mast cell, C3a and C5a complement, etc. It widens blood vessels by tempting endothelial contraction and the development of interendothelial gaps.

It is a derivative of tryptophan present in platelets. It is also present in neurons and enterochromaffin cells. Platelets accumulation allow its release and function to narrow down blood vessels, neurotransmitter, etc. It functions in inflammation, opposite to histamine.

Bradykinin are nonapeptides, vasoactive in nature. They produced by the activity of the proteases enzyme. They are significant in blood pressure control and inflammatory reaction. It causes vasodilation of arteries and veins of gut, aorta, uterus, and urethra. It is now also known for its role in neuro-signaling and a controller of some kidney and vascular functions.

Eicosanoids obtain from polyunsaturated fatty acids by oxygenation of biolipid. They function in various physiological mechanisms and pathological responses such as allergy, fever, inhibition of inflammation, etc. Its signaling mechanism is alike to cytokines in the inflammatory response and pro-inflammatory component formation. Eicosanoids have significant subgroups of diverse compounds most noticeably prostaglandins, leukotrienes, lipoxin, thromboxane, eoxins, etc.

They have a significant role in inflammatory response generation. Their production increased in injured inflamed tissues and significant inflammation signs indicated by their output. Prostaglandin E2 is most plentifully made in the body with various functioning such as blood pressure control, immune reaction, fertility, etc. in the inflammatory process, they have an important character for generating basic signs of inflammation: redness, swelling, and pain. Erythema and swelling occur due to rapid blood flow by enlargement and increased pervasiveness of vessels. Pain is mediated due to the action of PGE2 on sensory neurons.

Leukotrienes belong to the eicosanoids family and use lipid signaling as autocrine or paracrine signaling. Their synthesis is complemented with histamine and prostaglandin production. They stimulate smooth muscle contraction and their excess amount causes inflammation in the bronchial lining and in allergic reactions. They have also chemotactic influence on neutrophils.

Thromboxane are also produced from arachidonic acid metabolism. They obtain this name due to their clot formation activity known as thrombosis. The chief thromboxane types are thromboxane A2 and thromboxane B2. They are discharged from platelets but their secretion mechanism not understood. It has hypertensive nature and possesses vasoconstriction activity. And they promote platelet accumulation and formation of a clot.

Cytokine are small protein released from cells having particular activity on the interaction between cells and it is a communicating module of cells. They self-action or neighboring action molecules and in some cases they function on secluded cells also. These cytokines include tumor necrotic factor, interferon-gamma, interleukin 1 (IL-1), IL-12, IL-8, and granulocyte-macrophage colony-stimulating factor.

Positive acute-phase protein is a sign of high inflammatory reaction. They are sub-grouped according to their level of raising concentration in the blood are major, moderate, and minor. Promptness and extent of these proteins contrast with different species.

Albumin is 60% of the total protein found in serum. It is a globular protein synthesized by hepatocytes and secreted in blood. Serum albumin’s role is to exert colloid osmotic pressure and carrier of exogenous and endogenous ligands (i.e. drugs). Its reduction permits the availability of amino acids generation positive acute-phase proteins during inflammation.