Home » Zoology » Hormones of Insects Body and Metamorphosis in insect

Corpora allata, another component of the retro-cerebral complex, secrete this hormone. Chemically it is non-sterol lipid. This hormone plays role in metamorphosis because it regulates morphogenesis. Hence, play role in the development of larva to pupa, but not larva to adult. Corpora allata gland is located beneath the brain of insects. 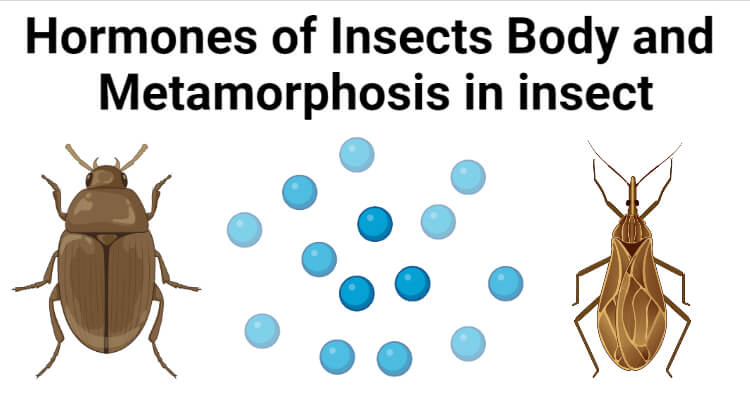 Structural change in the body, from larva to adult form is called metamorphosis, In other words, we can say that larval change to adult form, which can be seen from Porifera to Chordata. So metamorphosis is also present in insects. Insects display mainly 4 types of metamorphosis.

In this type of development, newly hatched creatures do not completely look like their adult, so there is half metamorphosis needed. Some terrestrial arthropods have aquatic immature stages called nymphs. Which respire by tracheal gills, but their adult respire by trachea. So in this type of metamorphosis immature stages have only changed some systems, such as the tracheal gills system to the tracheal system. There are no complete larva and pupal stages. Example – Dragonflies, Mayflies, etc.

In this type of metamorphosis, the newly hatched nymph resembles their adult but lacks wings and external genital aperture, growth and development of wings and genital aperture takes place gradually with increasing age. Nymph undergoes several nymphal stages through moulting to become adult. So we can say that no sudden metamorphosis takes place. Example – Gross-hopper, Aphides, Stink.

In this type of metamorphosis, all stages are present, egg, larva, pupa, and adult. Larva hatched from the egg, and this larva moults in pupa after some growth and development and later this pupa differentiate into the adult after some growth and development and finally young adult breaks puparium (upper covering of pupa) to come out. Example – Housefly, mosquito, butterfly.

Roles of Insects hormones and Pheromones in biological paste control

During the larval stage corpora allata, pair glands, located beneath the brain of insects, secreted Juvenile hormone. It allows larva-pupa or larva to larva metamorphosis but not to larva to adult metamorphosis. A synthetic compound namely Altosid, acts like the insect’s growth regulator is chemically similar to the juvenile hormone, application of this chemical seizes the development and metamorphosis of the larva into the adult and kills the larva, help in paste control, without harming the environment.
Another insect hormone, ecdysone secreted by prothoracic glands, this hormone induces metamorphosis. In some insects, larva s more harmful but the adult is less harmful or harmless. So ecdysone is very helpful in insect control, some plant leaves produce the ecdysone-like chemical which promotes premature metamorphosis into the adult so harmful larva is eliminated.