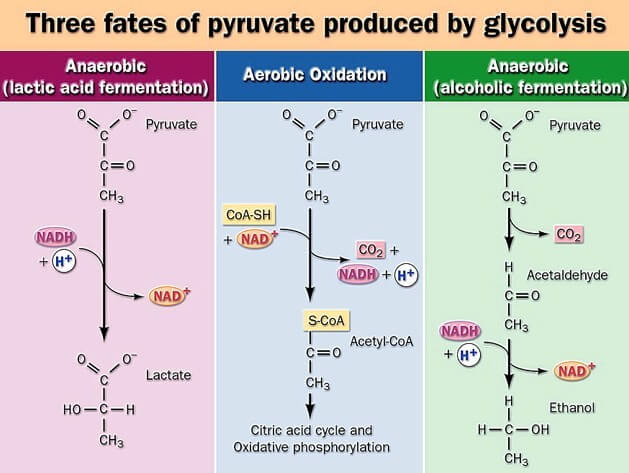 The fate of pyruvate in anaerobic conditions

Lactate formed in the active muscles transported to the liver where it can be broken down or restore into glucose, the restored glucose from lactate transported to muscles this cycle is called a Cori cycle.

The fate of Pyruvate in alcoholic fermentation

In the second step, acetaldehyde accepts an electron from NADH (formed during glycolysis) to restore it into NAD+ for the further cycle, and converted into ethanol, by the action of alcohol dehydrogenase enzyme.

The fate of pyruvate in case of aerobic respiration

The fate of pyruvate in the biosynthetic pathway

Pyruvate can also enter into the biosynthetic pathways such as fatty acids biosynthesis and gluconeogenesis. Pyruvate changed into acetyl CoA by the action of pyruvate dehydrogenase complex this acetyl CoA also enters into the biosynthetic pathway beside TCA. Pyruvate can also enter gluconeogenesis by the action of pyruvate carboxykinase converting it into oxaloacetate which with several step reaction change into glucose.