Euglena viridis (Gr.,eu, true+ glene, eyeball or eye pupil+L., Viridis, green) is a unicellular green organism with an eye-like photoreceptive structure.  It is phytoflagellate as it possesses both chloroplasts as well as flagella. It is autotrophic in sunlight but becomes heterotrophic in dark.

Habits and Habitat of Euglena viridis 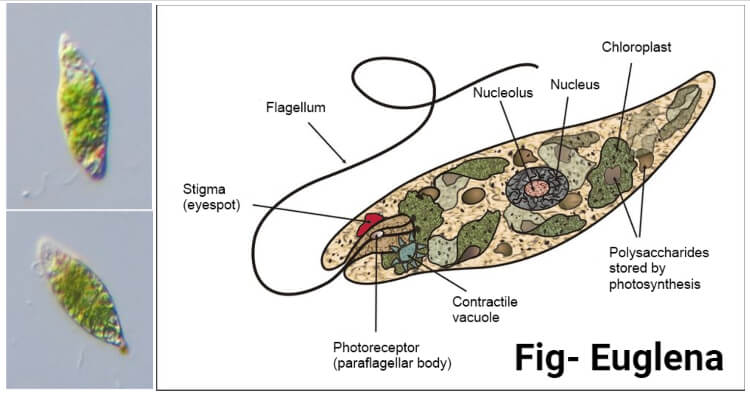 The cytoplasm is divisible into two zones: The ectoplasm is a clear, dense, and outer or peripheral zone, and the endoplasm is a fluid-like granular central zone. which contains: 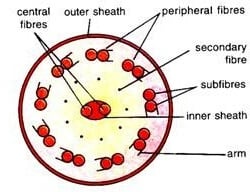 Electron structure of a flagellum

Euglena is the connecting link between the Plant and Animal kingdom. So, they have the characters of both plants as well as animals. so, the mode of nutrition is E. viridis is mixotrophic,i.e., the nutrition is accomplished either by autotrophic or holophytic as well as saprophytic or saprozoic.

Pinocytosis has also been observed to take place at the base of the reservoir for the intake of protein and other large molecules.

Osmoregulation and excretion in Euglena viridis

Euglena reacts to a variety of stimuli in the same manner as protozoa do.

Euglena viridis reproduces asexually by binary and multiple fissions and undergoes encystment. There is no evidence of sexual reproduction in it. They reproduce by longitudinal binary fission under favorable conditions.  The longitudinal binary fission is always symmetrogenic( i.e., the parental Euglena divides into two daughter individuals, where one is the plane mirror image of the other).

Euglena as an animal

Euglena is studied as an animal as well as a plant. It is more an animal than a plant because of the following reasons:

1 thought on “Euglena viridis- An overview”