An enzyme is a protein biomolecule that acts as a biocatalyst by regulating the rate of various metabolic reactions without itself being altered in the process.

All enzymes are proteins composed of amino acid chains linked together by peptide bonds. This is the primary structure of enzymes. All enzymes have a highly specific binding site or active site to which their substrate binds to produce an enzyme-substrate complex. The three-dimensional structures of many proteins have been observed by x-ray crystallography. These structures differ from one enzyme to another, and some of the enzymes and their structure has been described below:

How do enzymes work? 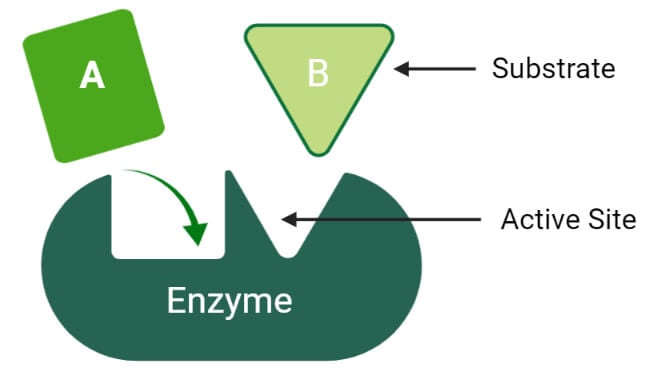 Enzymes are much larger than the substrate they act on, and thus there are some specific regions or sites on the enzyme for binding with the substrate, called active sites. Even in enzymes that differ widely in their properties, the active site present in their molecule possesses some common features;

Most enzymes are highly specific towards the substrate they act on. Enzyme specificity exists in a way that they may act on one specific type of substrate molecule or on a group of structurally related compounds or on only one of the two optical isomers of a compound or only one of the two geometrical isomers. Based on this, four patterns of enzyme specificity have been recognized;

Enzymes are vital for all biological processes, aiding in digestion, and metabolism. Besides, these are also involved in several other processes;

Some examples of enzyme-catalyzed reactions include;