Deoxyribonucleic acid (DNA) is the heredity material found in humans and all living organisms. It is a double-stranded molecule and has a unique twisted helical structure. DNA is made up of nucleotides, each nucleotide has three components: a backbone made up of a sugar (Deoxyribose) and phosphate group and a nitrogen-containing base attached to the sugar. Each strand has many nucleotides or says numerous sugar, a phosphate group, and nitrogenous bases. These nitrogenous bases are complementary to the other strand’s nitrogenous base to maintain helical symmetry. Each base pairs are bonded through Hydrogen bonding. These nitrogenous bases are Adenine (A), Guanine (G), Cytosine (C), and Thymine (T), A is complementary to T, and G to C. These bases are responsible for storing the genetic information. Most DNA is located at the cell nucleus so is called nuclear DNA, however, a small amount of DNA is also located in mitochondria, and so is referred to as mitochondrial DNA.

Types of DNA on the basis of forms 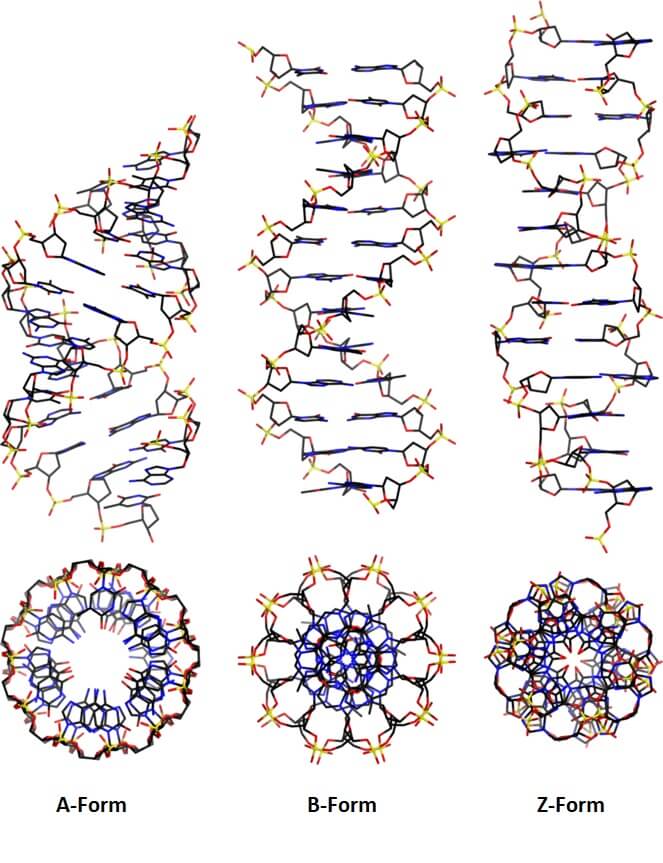 Figure: Types of DNA on the basis of forms. Image Source: Mauroesguerroto.

Types of DNA on the basis of location