Dermatophytosis refers to a skin infection caused by fungi. It is commonly known as ringworm due to its appearance on the skin. The infection can affect humans and animals. Moreover, it can spread from animals or other affected humans. The major reason for the infection is poor hygiene conditions. Skin, hair, nails are normally affected by body parts.

The intensity of dermatophytosis differs from sex, race, or occupation. To illustrate, Tinea pedis mostly occurred due to wearing shoes and it is also found that the infection mostly takes place during winter as the duration of wearing shoes is comparatively longer than the summer. Therefore, this type of infection mostly occurred in regions with a temperate climate.

Another study on the causative agent of the infection describes that Trichophyton rubum and Microsporum oudouinii are frequently isolated from the USA, while T. tonsurans are mostly involved for infection in Mexico and M. ferrugineum is commonly isolated from affected individuals in Japan. Therefore, the distribution of fungal pathogens also differs from one region to another.

Apart from these, several studies on the transmission of infection reported that E. flosaccosum and T. violaceum are mostly transmitted from person to person due to unhygienic habits such as sharing the same towels or cloths. Microsporum canis, on the other hand, is reported for transmission from pet animals such as cats and dogs. Apart from human or animal transmission, dermatophytosis causing fungi can also found in soil. For example, M. gypseum and M. fulvum are reported for their presence in soil. 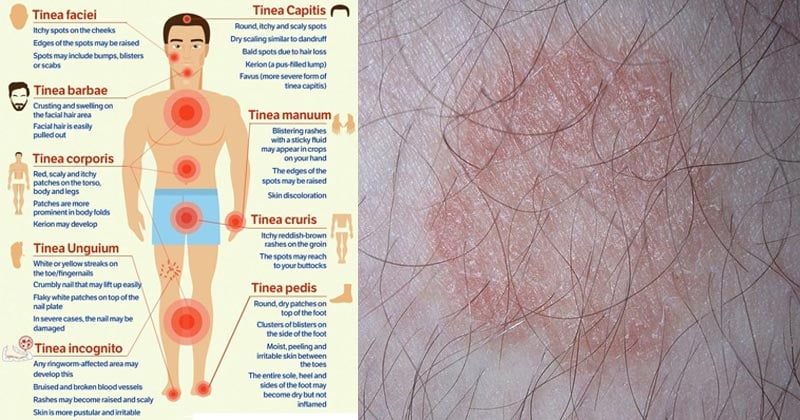 This type of fungal infection occurs at the foot of humans. The condition is commonly known as Athlete’s foot. The infection occurs in the epidermis region of the skin. Itching, scaling, redness is the common signs of the infection. It frequently occurs between the toes and at the bottom of the foot. The fungal species involved in causing this type of infection are T. rubrum, T. mentagrophytes, Epidermophyton floccosum, etc.

It is also called as Onychomycosis and refers to the infection of the nail. Common symptoms include discoloration of nails, generally turns into yellowish color, deformation of the nail, etc. Fingernails and toenails are mostly affected by this type of infection. It is also associated with the hyperkeratotic desquamation of the hand and finger. The causative agents include T. rubrum, T. mentagrophytes, etc.

In this case, ringworm formation occurs at glabrous skin. Along with circular lesion inflammation also takes place. Children are mostly affected by this type of infection. The primary lesion occurs on exposed parts of the body such as the face, shoulders, arms, etc. due to exposure to the infected pets such as cats, dogs, horses, mice, etc. The fungal species reported for this type of infection are Microsporum canis, T. rubrum, T. mentagrophytes, etc.

This type of ringworm occurs at beard follicles, and other neck and face regions related to the beard. Severe infection can lead to hair loss in the region. The most common causative agent of the infection is T. verrucosum.

This type of infection occurs during infancy and is also the most chronic type of ringworm. Treatment during infancy is required to stop its occurrence in a later period. The infection is characterized by the formation of a dense mass of mycelium and arthrospores that are formed in the hair follicles. The causative agents include T. schoenleinii, T. violaceum, and M. gypseum.

In this case, infection occurs at the scalp. Dermatophytes grow into the hair follicle during the infection which leads to the decomposition of keratin. As a result, hairs become fragile and easily broken down. In the adjacent epidermis, some growth of hyphae also occurs but the hyphal growth in the follicle is confined only inside the hair shaft. This type of condition is also known as enothrix which is caused by T. tonsurans, T. violaceum, and T. schoeleinii. Tinea capitis causing fungi include M. audouinii and M. canis.

E. floccosum is the only organism related to this group which causes infection in skin and nails. Under a microscope, oval to widely clavate macroconidia with rounded distal ends can be observed. The conidia are characterized by smooth wall and formation of clusters from the sides of the hyphae. One major characteristic includes the absence of microconidia.

This group of fungi is mostly related to the infection of hair and skin. The characteristics include obovate to fusiform, echinulate, multiseptate macroconidia with thick walls. Important species include M. audounii, M. fulvum, M. gallinae, M. gypseum, etc.

Hair, skin, and nail all these body parts are infected by several Trichophytons. Characterization of this group is not as simple as previous groups due to the lack of spores in some species. Therefore, the characterization is performed on the basis of colony morphology. The macroconidia are characterized by clavate or pyriform with a grape-like cluster appearance. Important species include T. rubrum, T. violaceum, T. concentricum, etc.

This group of fungi are not characterized as producers of exotoxins or endotoxins. However, studies reported the occurrence of allergies from 2-3 months of old cultures. Therefore, the presence of tricophytin is reported. These fungi have a group-specific antigen. Protein fraction from T. mentagrophytes and T. rubrum are found to exhibit positive precipitin reactions in the sera of rabbits immunized by homologous fungus. However, no cross-reaction is found with these antigens in the case of heterologous sera. T. mentagrophytes, T. rubrum, and Penicillium spp. are also studied by gel diffusion and haemagglutination test. A study demonstrated the development of cellular antibodies after intracutaneous injection containing trichophytin in animals. On the basis of the type of host the immunity may be lost for a few days to several years. Cellular antibodies which started to develop after 24-48 hours of the trichophytin exposure, may be lost for 7 days. Active glycopeptides and polysaccharides from different dermatophytes have been extracted for immunogenic analysis and glycopeptides are found to have trichophytin activity. The chemical structure of these antigens differs from species to species, however, serologically these are similar.

Antifungal medications are widely used for the treatment of dermatophytosis. Generally, there are two types of drug administration used for treatment, topical application, and oral administration. The drug choice and route of administration is dependent upon the clinical type and severity of the infection. Azole drugs are widely used for the treatment of dermatophytosis. Apart from that griseofulvin is also used in many cases. In case of severe infections, the application of only one type of drug sometimes is not effective enough due to drug resistance. In those cases, oral administration along with topical antifungal ointments is used.