Foodborne illness refers to the different diseases and infections caused by microorganisms in food items. This article is mainly focused on the Foodborne illness caused by bacteria. Another term related to foodborne illness is food poisoning. A closer look toward these terms can help to understand different types of illnesses related to food. The illness can occur mostly in two ways, firstly, by toxicity which can occur due to the secretion of toxic metabolites by the bacteria and secondly, by an infection caused by the bacteria present in a specific food item. Each and every food item is susceptible to bacterial contamination and it is a major concern in food industries. This article describes some of the diseases caused by bacteria found in different food products. 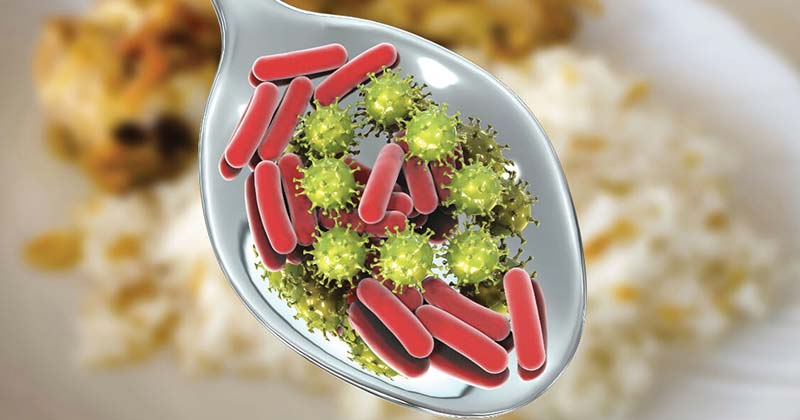 Botulism is a disease caused by the toxin produced by Clostridium botulinum. Clostridium is a rod-shaped, anaerobic, spore-forming bacteria mostly found in soil. There are seven types of Clostridium divided on the basis of the serological specificity of their toxin. These types include Type A to type G.

C. botulinum strains are further categorized under three different groups such as:

Production of botulinum toxin depends on the ability of cells to grow in food and autolyze there. In the case of type A, B, E, and F, the toxin is first synthesized as large inactive protein which becomes active after hydrolysis. Therefore, toxin production is dependent upon the parameters which regulate spore germination and growth of the bacteria. The nutritional value (glucose or maltose are essential for toxin production) of the food is also plays an important role in the case of toxin production. Along with this, factors such as moisture content, pH, O-R potential, salt content, temperature and time duration of storage also facilitates the production of toxin. Due to the anaerobic characteristic of the bacteria, canned foods are most susceptible to Clostridium contamination and botulinum toxin.

The botulinum toxin is a protein with high toxicity which can be lethal in minute concentration. Upon ingestion, the toxin is absorbed in the small intestine and it affects the voluntary muscles of the body. Another important characteristic of the toxin is its thermolability. However, the heat resistant property varies in different strains and types. Consumption of a very small amount of food containing the toxin can lead to death. The symptoms include acute digestive disturbance, nausea, vomiting, diarrhea along with fatigue, and dizziness. After that, more severe symptoms occur such as constipation, paralysis of involuntary muscles, paralysis of the respiratory system, and heart. Finally, death occurs due to respiratory failure.

These enterotoxins are simple protein structures made up of single polypeptide chains that are cross-linked by a disulphide bridge. Production of toxins is dependent upon the temperature of the system. The optimum temperature requires for the production of toxins is 400C. The food items involved in Staphylococcus food poisoning include clustered and cream-filled bakery goods, ham, and poultry products. Most of the food poisoning cases occur due to inadequate cooling of the processed food.  The common symptoms of food poisoning in humans include nausea, vomiting, abdominal cramping, diarrhea, blood and mucus in stool, headache, muscle cramping, etc.

Salmonellosis is a medical condition that occurs due to the ingestion of viable cells of Salmonella. It is one of the most common food-related infections. Salmonellae are gram-negative non-spore-forming rod-shaped bacteria. There are several species of bacteria that can lead to this type of infection such as S. cholerasuis, S. enteritidis, S. heidelberg, S. infantis, etc. Salmonella infection is mostly spread by food items such as meats and poultry products. Un-refrigerated food items are highly susceptible to Salmonella contamination. Salmonellosis is a gastrointestinal infection and the common symptoms include nausea, vomiting, abdominal pain, and diarrhea.

The causative agent of this infection is Clostridium perfengens, type A, gram-positive, spore-forming anaerobic rod-shaped bacteria. The optimal temperature required for the growth of the bacteria is 430C-470C, and the pH range is 6-8. Spore contamination mostly found in raw food materials due to contamination of soil or sewage. Most commonly involved food items include meats, poultry products, and fish products. The symptoms of the infection appear within 12 hours of ingestion. The symptoms include acute abdominal pain, diarrhea, gas, fever, nausea. According to different case studies, millions of viable cells of C. perfengens per gram food are required for the occurrence of the infection. Some studies also reported an enterotoxin which is released during the sporulation of the cells. The toxin is responsible for fluid accumulation in the intestinal lumen.

E. coli is generally considered as the normal flora of the human intestinal tract. However, there are studies that support the fact that there are serotypes of human E. coli which are involved in human diarrheal disease and food poisoning outbreaks. These serotypes are classified as enteropathogenic E.coli (EEC). The disease caused by EECs is again categorized into two groups. Firstly, among the EECs some strains are reported for its production of enterotoxins which leads to cholera-like illness in humans. Production of these enterotoxins is directly connected to the ingestion of the bacteria and colonization of the bacteria at the upper intestinal tract of humans. Secondly, there is a group of invasive strain that is responsible for the production of cytotoxins which leads to invasive illness, colitis, or dysentery like symptoms. E. coli can contaminate a variety of foodstuffs and highly contaminated foods are required for the occurrence of the disease.

Apart from the mentioned bacterial infections, there are several other bacteria which involve in food-related illness. Examples of such diseases and causative agents are Shigellosis, caused by S. sonnei, S. flexneri, Yersinia enterocolitica, Campylobacter jejuni, Listeria monocytogens, etc.