Food and selection of food

a. Import: in this method food such as algal filament on contact passively sinks into the body by rupturing the plasmalemma and ectoplasm at the point of contact. The rupture site soon heals up.

b. Circumvallation: In this method, Amoeba sends out the pseudopodia around the prey forming a cup-like structure called a food cap. The food cup does not touch the food, but edges of the food cup fuse around the food to form a non-contractile food vacuole with a considerable amount of water. This method of ingestion is used for capturing active prey like flagellate or ciliate.

c. Circumfluence: In this method, when Amoeba comes in contact with less active or immobile bacteria, a pseudopodium comes in contact with bacteria and envelope it completely in a food vacuole within the cytoplasm. By repeating this process, the Amoeba can also ingest and roll up long filaments of algae. In other species of Amoeba, food is ingested by import and invagination.

d. Invagination: In this method, food is adhered to by toxic and sticky secretion of the ectoplasm. The ectoplasm along with food is enfolded as a tube into the endoplasm, and the food particle is sucked in, the plasmalemma disappears and ectoplasm changes into endoplasm.

e. Pinocytosis: It is the ingestion of liquid food in bulk. It takes place by the cell through the plasma membrane. It is induced by proteins, inorganic ions, and certain dyes. It does not take place through the whole surface of the body of the amoeba. It is thought that plasma lemma bound with the colloidal food material forms pinocytosis channels which run from the surface deep into the endoplasm. From the internal ends of these channels, pinocytosis vesicles or pinosomes, containing engulfed liquid material. The pinosomes are transported to cells where they then fused with a lysosome. It is not yet been confirmed whether pinocytosis is a normal means of ingestion in Amoeba. 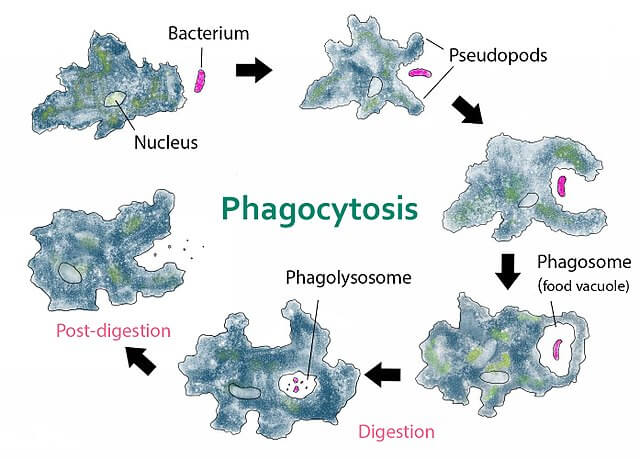